The two students, Sally Grindsted and Anja Christoffersen, were rewarded with the ‘Best article runner up’ at the New Friends conference 2015 in the Netherlands. The article is about how to get people to accept and understand social robots using theatre.

Social robots are becoming more common in everyday life. In hospitals for example, robots enables presence without physically being present, using a so-called remote robot. Or robots are used to improve the quality of life of older people (the robot seal Paro).

Many have never met a robot, and therefore it can be both overwhelming and a little scary, but still also exciting to meet one. There is also a part of the population who still doubt the idea of ​​getting close to the robots. They are afraid of losing the human touch and that the robots will replace employees in the health sector referring to the robots as 'cold' hands.

Sally Grindsted and Anja Christoffersen chose as part of their 6th semester project at Art and Technology at Aalborg University to set up a play in which a robot and a human interact with each other. The idea was to show a possible scenario where robots have been given a greater role in everyday life. The intention was to show how a robot could be beneficial in some situations, such as a tool to help lonely people.

The article, which the two students wrote on the basis of their 6th semester project in cooperation with Elizabeth Jochum and Zheng-Hua Tan and his division (iSocioBot), won the Best Paper Award Runner-up on the grounds that it is an exciting project with great potential. It was the supervisor Elizabeth Jochum, who urged the two students to attend the conference. About the benefits of participating in the conference, they tell:

- The conference gave us the opportunity to meet a lot of other people who are both doing research and are interested in robots in healthcare. We got the opportunity to talk to people, get ideas and look what is happening just now in this field. 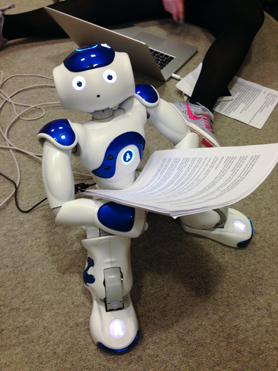 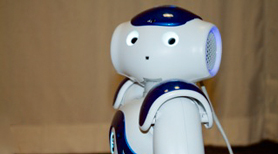